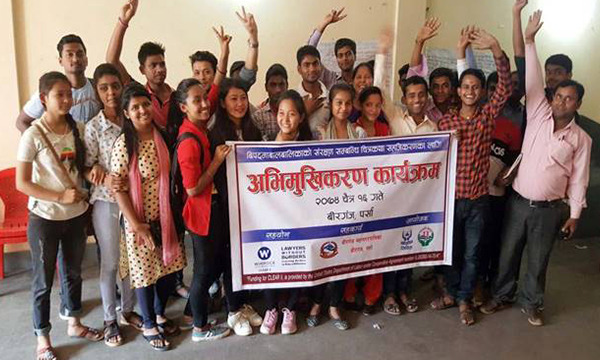 In 2019, LWOB’s Deputy Director, Jessica Ryckman, traveled to Shanghai, China to accept an award on behalf of Lawyers Without Borders at the International SOS Foundation’s 2019 Global Duty of Care Awards Summit. The annual awards recognized organizations for their excellence in mitigating health and security risks and the successful protection of the global workforce. Attendees, who included world leading stakeholders responsible for protecting the health, safety and wellbeing of their people, joined together in Shanghai to share best practices and trends exploring the next generation of Duty of Care. LWOB was honored for its efforts in effective communications campaigns and programs that mitigate travel, health, or security risks to mobile workers. LWOB received the “Honorable Mention Award” in the Communications category.

Linklaters was named one of IMPACT2030’s most innovative businesses for the firm’s collaboration with Lawyers Without Borders to help mend Liberia’s legal system after the country’s civil war. Linklaters took on the huge undertaking to summarise and index over 10,000 cases spanning Liberia’s legal history after its civil wars left the country’s legal system severely damaged. Members of the Liberian judiciary now have easier access to previous judgments to ensure a consistently applied rule of law. The achievement was recognised by IMPACT2030, an organisation founded in response to a UN Resolution to further engagement with the private sector that highlights best-in-class approaches to connecting skills, passion and expertise within companies towards advancing the UN Sustainable Development Goals.

Liberia’s legal system is precedent-driven: judges require access to previous case decisions when giving a ruling in a case. After the civil war, the lack of an index for ease of searching previous case decisions was identified as a significant challenge to the rule of law and the development of an equitable and stable society. Linklaters’ innovative project management made the production of an index possible. The result has helped to anchor efforts to rebuild Liberia’s judicial system and contributes directly to the establishment of a consistent rule of law in the country.

"The impact of distributing the Liberian case digests and index would truly not have been possible without the commitment, vision and skill of a superlative team at Linklaters. The effort and organisation involved was colossal and should not be underestimated."-Christina Storm, the former Executive Director and Founder of not-for-profit Lawyers Without Borders which instructed Linklaters on the project

"I am very proud of our lawyers for their hard work on this project which began in 2009. The mammoth task of summarising and indexing case law for Liberia is a great achievement in protecting the rule of law and the certainty it provides. We feel that it is our responsibility as international lawyers to assist in the preservation and advancement of the rule of law which underpins the development of society. -Charlie Jacobs, Senior Partner and Chairman at Linklaters

"Our people are passionate about social impact, and we are proud of the hundreds of lawyers across 18 offices of the firm that have contributed to this momentous project since its inception. Championing the rule of law and the integrity, fairness and certainty that it brings is central to what we do as a firm."-Elsha Butler, Global Pro Bono Manager from Linklaters